An insider’s guide to the best things to do and attractions in Náxos, including visiting museums and churches as well as the best beaches and walking tracks. By Marc Dubin, Telegraph Travel’s Náxos expert.

Náxos attracts a rather different clientele than neighbouring Páros or Mýkonos: folk willing to accept the occasional rough-and-ready-ness of the island, and able to look after themselves. While the main town’s medieval Boúrgos and Kástro districts have ample interest, the real USP is the Naxian backcountry, especially its mountain villages, hidden monuments and southwest coast beaches. 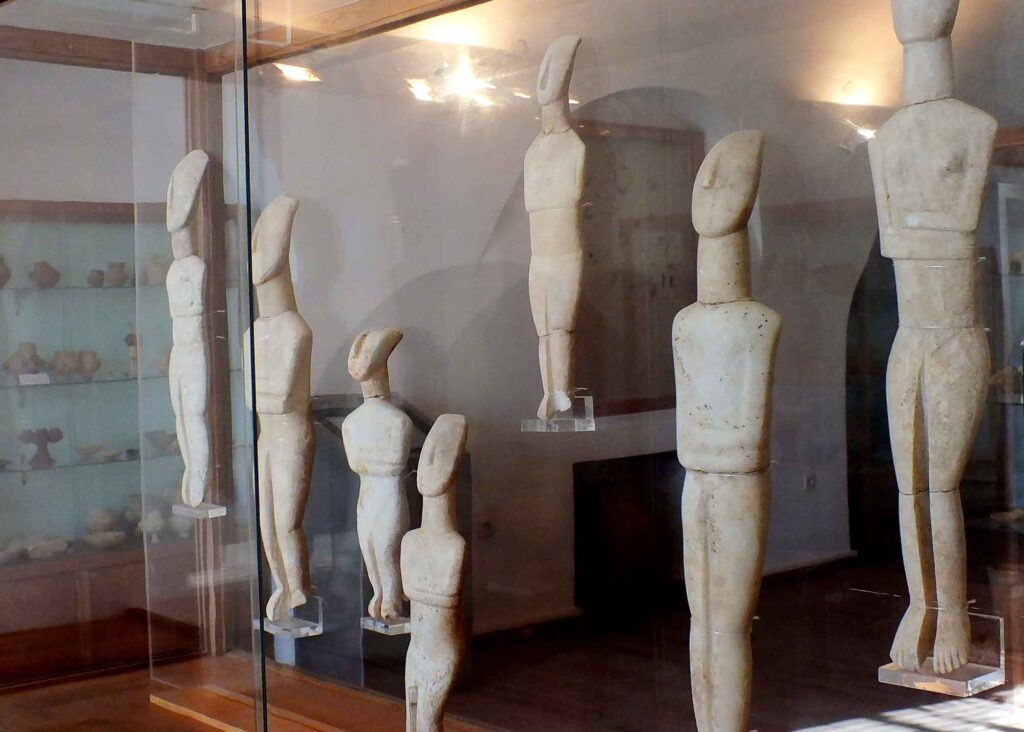 The most unusual museum of several in the Kástro is the private Della Rocca-Barozzi Venetian Museum (May–Oct daily 10am–2.45pm & 6.30–10.30pm), housed in an old Venetian mansion just inside the Tráni Pórta (northwesterly) gate dividing Kástro from Boúrgos. There are frequent temporary exhibits, as well as multilingual guided tours; it’s also the venue for the Domus Cultural Festival (see Nightlife). The state-run archaeological museum (Tues–Sun 8.30am–2.45pm), installed in the former French Commercial School where Greek novelist Nikos Kazantzakis was briefly a pupil, weighs in with a substantial collection of Cycladic figurines, one of the most important outside of Athens. 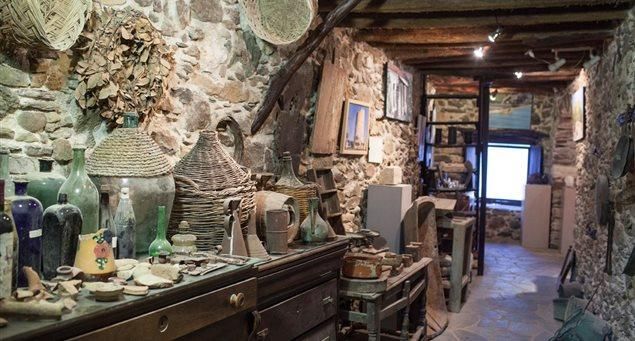 The Roman Catholic cathedral on the main square of the Kástro, last vestige of the Venetian tenure, is well worth a peek inside if you coincide with its sporadic opening hours aside from Sunday-morning Mass. Its icons lend a wonderfully strange perspective on both Orthodox and Catholic themes: a rare Virgin nursing the infant Jesus (a replica, the original is stored away in the Catholic Archbishopric); San Rocco (Ágios Rókkos) with his familiar dog; and Saint Charles Borromeo, Counter-Reformation archbishop of Milan and theologian.

Otherwise, between Halkí and Moní village in the Trageá region, the rural church of Panagía Drossianí, built in phases between the 4th and 12th centuries (open daily all day; no photos inside), is one of the most architecturally and artistically important in Greece. The oldest core of the building has fine, if battered, 5th-century frescoes of the equestrian saints George and Dimitrios, Christ Enthroned, the Virgin and a Deesis – given the vicissitudes of the island, it’s amazing anything has survived. 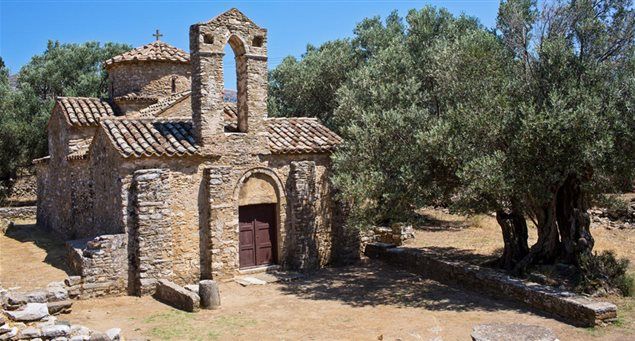 Out in the countryside, there are two monasteries well worth visiting. Just off the road between Áno Potamiá and Mélanes villages huddle the ruins of Kalamítsia ‘palace’, founded by local Jesuits in around 1670, and more of a retreat for the order and its guests than a strictly governed monastery. Thus the low-slung chapel is surprisingly modest, while the impressive arcaded refectory has three lancet windows overlooking the former gardens with palm and cypress trees protruding from tangled brambles. Nearby a giant fireplace indicates the kitchen. A broad central staircase leads down to a cellar cistern with still-flowing spring, or more daringly up to the roof terrace for great views. A free-standing dovecote across the access track preserves bird-niches inside; an internal arch upholds the loft.

More intact – and a favourite poster subject thanks to its elaborate buttressing and juxtaposition against the Aegean east of Náxos – is the striking Orthodox tower-monastery of Fotodótis, 2km along an easily driveable, signposted dirt track from the Filóti–Aperáthou asphalt. It’s also accessible by walking paths.

Originally a three-aisled Byantine basilica, most likely founded during the Komnenoi dynasty early in the 12th century, it was enlarged and fortified around 1497, judging from an inscription. There’s superb marble flooring, and on the témblon (altar screen) relief you glimpse traces of the original wax-based pigment. On August 6, the feast of the Transfiguration, the courtyard hosts the annual festival; otherwise it’s open summer Mon–Sat 10am–2pm, winter 9am–1pm.

Impossible to miss is the portal (called the Portára locally), all that was completed of the Temple of Delian Apollo on an islet immediately north of town, now tethered to the mainland with a causeway. It dates from the time of local ruler Lygdamis (c. 525 BC). Even more imposing is the skilfully reconstructed Temple of Demeter at Gyroúla beyond Sangrí village, on a hilltop overlooking a fertile valley settled since the Archaic era. The grounds are always open, though a small display of on-site finds works only Tues–Sun 8.30am–3pm. 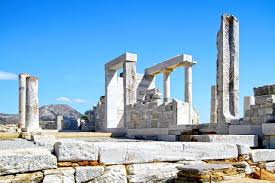 The lions at ancient Delos were carved from Naxian marble; local quarries sometimes yielded fascinating duds, as in the two Archaic, unfinished koúroi (idealised male statues) near Mélanes, over 5m long and fairly detailed, abandoned either because of a fatal flaw in the stone or damage in transit. From the obvious parking area, walk east along the valley bottom to the lower Fleriós koúros, left lying under a spreading oak. More dramatic is the Farangioú koúros, a ten-minute walk southeast up a hillside covered in autumn crocuses, with an EU-funded step-path where necessary. Though also recumbent, his broken-off feet have been found and displayed upright. There’s another, larger (10m) but less finished koúros, abandoned on a hillside just above the northern beach village of Apóllonas.

The water offshore in the straits with Páros is superb, though there are occasional reefs to cross getting in, and it can be breezy. Ágios Prokópios and neighbouring Agía Ánna at the near end of the main southwesterly beach strip have the lion’s share of facilities and the best bus connections. Ágios Prokópios is also home to Blue Fin Divers (bluefindivers.gr), the most established scuba outfit on the island, offering a mix of cave, wreck and reef dives though the nearby beach itself is reef-free and fairly wind-protected. 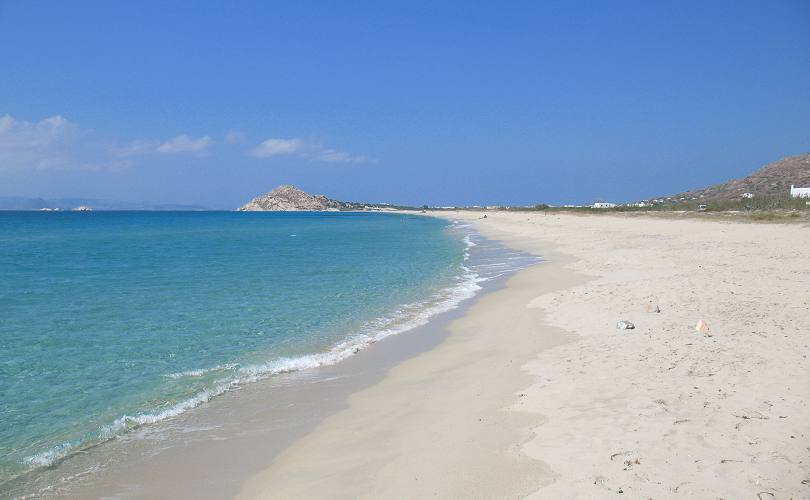 Dunes become more common and amenities less so as one progresses south to Pláka  beach, where nudists make their first discreet appearance in the big dunes away from civilisation. Orkós, just south, is a mecca for windsurfers and kite-surfers, who exploit the steady northerly meltémi wind with the enclosing Mikrí Vígla headland as a reassuring lee shore. A local school (flisvos-kitecentre.com) takes advantage. Beginner windsurfers might be better off with Naxos Surf Club (naxos-surf.com), at Ágios Geórgios beach just south of  town.

Beyond Mikrí Vígla, with its cluster of accommodation, Kastráki and Glyfáda (backed by a salt marsh) are less frequented beaches. The most scenic, perhaps, are the little juniper-fringed coves tucked into the indented headland of Cape Kouroúpia, pristine except for the ruins of a hotel project begun, then abandoned, during the 1967–74 junta years. Beyond this cape, the ‘beach strip’ concludes with slightly more sheltered sandy coves at Pyrgáki and Agiassós.

The two main roads southeast out of Náxos Town head towards the Trageá, a vast, olive-grove-mantled upland near the centre of the island, before turning north to thread through several more appealing villages scattered along the mountainous spine running down from the summit of Mt Zas (1001m/ 3,284ft). 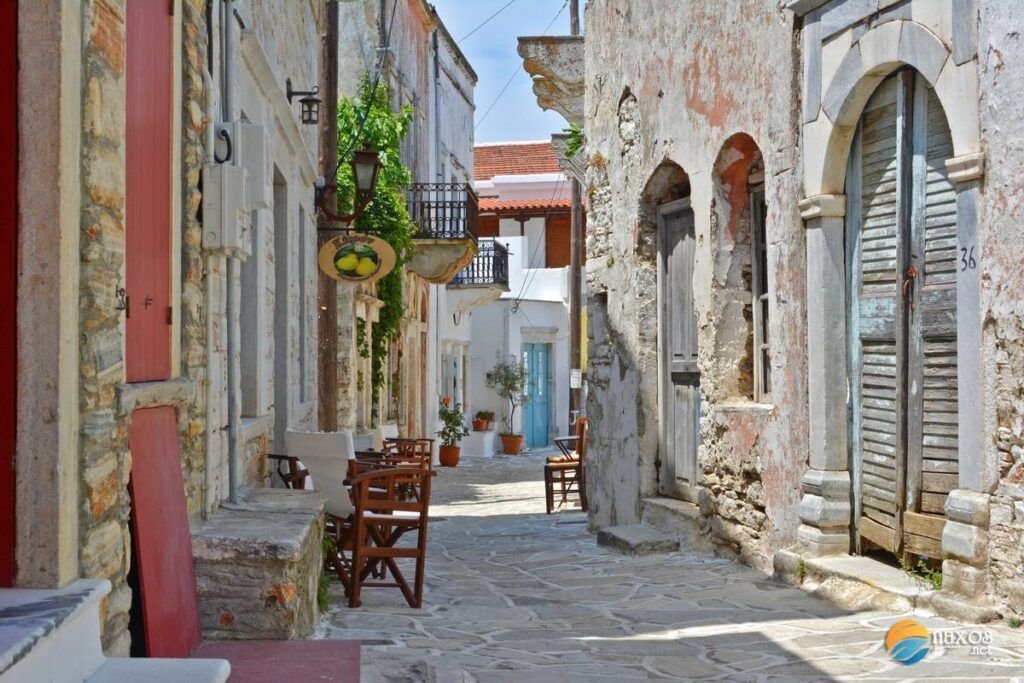 The first really tempting target is Tragean Halkí, a handsome old settlement with a medieval tower-house or two and a vine-festooned tavern on the fine old square. Walks lead to nearby Potamiá (Trail no. 5) and then over the ridge (Trail no. 6) towards Flerió, Kourounohóri and Melanés (allow over 2hr in total), or from nearby Kalóxylos up to Moní (Trail no. 4). For the less committed, there’s a 6-km loop walk around Halkí, with (400m along) the photogenic if locked Byzantine chapel of Ágios Geórgios Diasorítis. In the opposite direction, towards Keramí hamlet, stands the curious 10th- or 11th-century Byzantine chapel of Ágii Apóstoli, with a second-storey private chapel above the main entrance.

Another ambitious, but rewarding, walk from Halkí involves following trail 3 east past Ágii Apóstoli over the ridge to Fotodótis monastery, then north to Aperáthou village.

Guide booklets and maps are sold locally, though useful map placards are admirably placed near trailheads.

Aperáthou (alias Apíranthos) is another venerable village, with sumptuous marble paving for its lanes and a choice of cafés and tavernas at which to enjoy the view southeast. It’s the birthplace of Manolis Glezos (1922– 2020), a former leftist MEP, Greek MP and environmental activist, who tore the swastika down from the Acropolis early during the German occupation and paid dearly for it, both then and under subsequent right-wing Greek regimes. Steep paths go northwest from here to Moní (trail no.8), or east to the ancient church of Agía Kyriakí.

Kóronos, next up beyond the Stavrós Keramotís pass – reputed the windiest place on Náxos – proves to be a time-warped, tiered village in the fold of the mountain, with narrow lanes and arcades. The local men once worked in the now-collapsed emery-mining industry, and nearby there’s an open-air display of the works and the cable-car system that transported the ore down to the east coast at Moutsoúna for shipment out. Moutsoúna itself, should you make the 6-mile (10-km) drive down from Aperáthou, is a dozy place with a couple of expensive tavernas and a surprisingly good sandy cove next to the rusting ore-loading apparatus. 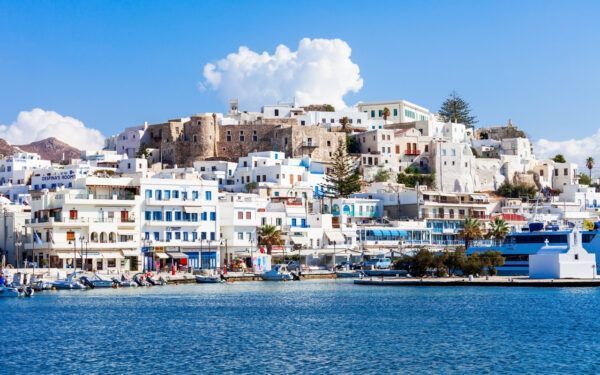 Naxos: A World to Experience “Off-Peak” Too – Rent A Car to Explore 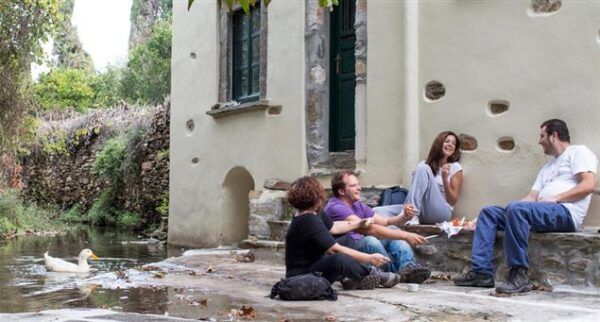 The People of Naxos and the Small Cyclades: Open Hearted and Love of Life